Italian Consul General Adriano Monti presented Umberto “Tony” Turano with the Cavaliere dell’Ordine al Merito della Stella d’Italia at the consulate’s Festa della Repubblica celebration on June 2 at the Italian American Sports Hall of Fame in Chicago. The award was bestowed by Italian President Giorgio Napolitano upon Tony in honor of his contributions on the business and cultural fronts to promote Calabrian and Italian culture in America.

“It was a tremendous honor to have my work in the community acknowledged in this way,” Tony says. “But my greatest honor has been to work with my brothers for the past 53 years. I could not have accomplished what I have without them.”

Known for his tireless work ethic and his fierce devotion to family and heritage, Tony is a supremely successful businessman who has never forgotten his roots.

He and his brothers, Renato and Giancarlo, were born to Mariano and Assunta Turano in the mid-1940s and early 1950 in Castrolibero, Cosenza, Calabria. With the region devastated by World War II, the couple moved with their sons to Chicago in 1958 to make a better life for their family.

Tony served in the U.S. Army from 1966 to 1968, rising to the rank of corporal. He married his high school sweetheart, Jean Dickman, a year after his honorable discharge.

Mariano founded Turano Baking Co. in 1962, with his sons working every aspect of the business. Involved in operations from early on, Tony has served as Production Manager, Director of Operations, Vice President of Operations, Executive Vice President and President of Turano Baking Company. Over the decades, he and his brothers transformed a 2,000-square-foot facility into a baking industry titan operating out of five facilities encompassing more than half a million square feet, employing 750, and producing more than 400 types of breads and other baked goods.

Tony and his brothers currently serve as Co-Chairmen of the company and the third generation of the Turano family has stepped into leadership roles, including his daughters — Gena, Jennifer and Jessica.

Tony’s prowess in the business world has been hailed by the State of Illinois, Snack Food & Wholesale Bakery magazine, Baking & Snack magazine, and American Society of Baking Hall of Fame.

Firmly believing that success carries with it a responsibility to give back, Tony has been a force for good in the Italian-American community for decades.

One of the founding members of Casa Italia and its Chairman from 2011 to 2013, Tony is also a founding member of the Calabresi in America Organization, serving as President from 2000 to 2002. As the driving force behind CIAO’s annual excursion to Calabria since 1991, Tony has shepherded more than 2,000 paesani across the Atlantic to immerse themselves in the land of their forebears.

Bringing those same skills to the halls of academe, Tony has coordinated itineraries and curricula for student exchanges between the University of Calabria and the University of Wisconsin-Parkside since 1998. UW-Parkside presented Tony with a Lifetime Recognition Award in 2011 in gratitude for his contributions.

The Joint Civic Committee of Italian Americans presented Tony and his brothers with the Joseph Cardinal Bernardin Humanitarian of the Year Award in 2003 and St. Joseph Seminary bestowed the coveted Ite Ad Joseph Award upon Tony in 2007.

“We have never forgotten where we came from,” Tony explains, speaking for himself as well as his brothers. “We know the struggles that our parents’ generation endured and we were glad to build on the foundation they built for us. We have close ties to the community and we have a lot of respect for its leaders and members.”

For coverage of the Festa della Repubblica celebration, click here. 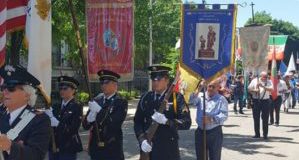 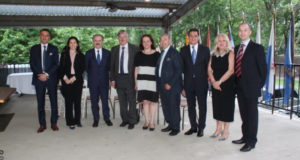 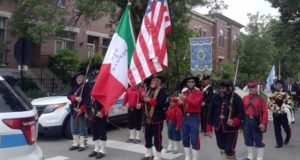