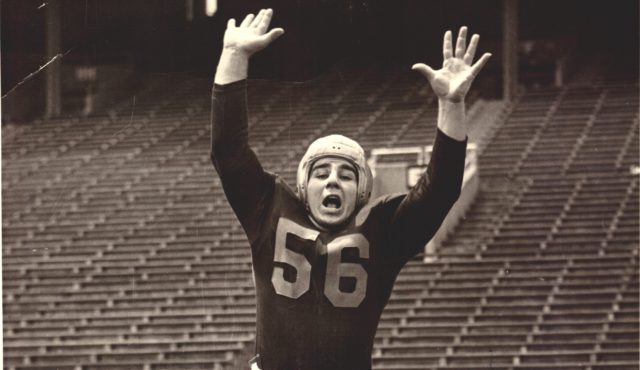 A standout nose tackle in high school and college, Ralph Serpico emerged as a pillar of the community he grew up in throughout his adulthood.

From high school football star to Rose Bowl champion and beyond, Ralph “Babe” Serpico was a role model and force for good in his native Melrose Park.

“You have a community of mostly working-class Italians, and they’re reading stories in the newspaper about my dad winning the Rose Bowl,” Melrose Park Mayor Ron Serpico says. “It was a big source of pride for everyone in the community.”

Ralph got the ball rolling as a standout nose tackle for the Proviso High Pirates in the 1940s.

He was so dominant at his position that he was named to the All-State team at a time when they were picking only the very best at each position. The Chicago Tribune dubbed him the best defensive player in Illinois in 1942.

When the University of Illinois got wind of Ralph’s prowess, they offered him a scholarship, punching his ticket to greater things.

“His parents were immigrants who came right to Melrose Park from Naples,” Ron says, “and here my dad was going to college on an athletic scholarship, so football really paved the way for him.”

He was the captain of the team his senior year, when the Fighting Illini played UCLA in the Rose Bowl in what experts consider to be one of the top 10 events in the century-plus history of Big Ten athletics.

“Back in 1947, there were three undefeated teams — UCLA, Notre Dame and Army — and UCLA was upset because they had to play U of I, which had only one loss, so neither team could be national champion,” Ron reports. “U of I went into the game 14-point underdogs, and they beat them 45 to 14.”

You’d think a Rose Bowl win would go to a person’s head, but not for Ralph.

“He didn’t have an ego. It wasn’t for him,” Ron explains. “It was for the Italian community of Melrose Park.”

During his storied collegiate career, he earned All-American honors, played in the East-West All-Star game, was invited to play in the North-South matchup, and received the A.R. Rizzutto Award for outstanding amateur Italian-American athlete from the Rizzutto Civic League.

After he graduated, he played for two years for the Chicago Rockets of the short-lived All-America Football Conference. And for another 10 years, he was a player-coach for the Melrose Park Rams, a local semi-pro team.

Ralph eventually settled down, marrying his high school sweetheart, Josephine Luzzi, and taking a job with the county assessor’s office. But he stayed involved in the sport even after returning to “civilian life.”

“My dad would come home from work, take off his suit coat, take off his tie, and he would go one-on-one with the players (at Proviso East),” Ron says. “He would go to the games and scout from the stands. At half time, he would come down and tell the coach what he saw.” 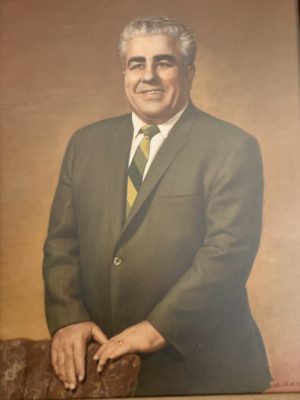 As the committeeman for the township Democratic Party, Ralph emerged as a pillar of the community.

“He was the go-to for people who had problems,” Ron recalls. “Our house should’ve had a revolving door. People would come over in need of a job or money, and he would help with whatever issues they had.”

Ralph raised four boys who followed in his footsteps, playing football in their youth and becoming involved in the community as adults. And on Nov. 9, a quarter century after he passed away at the age of 70, he is being inducted into the National Italian American Sports Hall of Fame.

“I was privileged every day to witness the very qualities that his University of Illinois football coaches and teammates saw in him as their captain,” Serpico says. “He would be more than humbled to be included in the National Italian American Sports Hall of Fame.”

The above appears in the October 2019 issue of the print version of Fra Noi. Our gorgeous, monthly magazine contains a veritable feast of news and views, profiles and features, entertainment and culture. To subscribe, click here.

Vincent Martorano is a student at Ball State University majoring in news journalism with a minor in sports journalism. He began writing his senior year at Vernon Hills High School, choosing sports writing because it brings together two of his passions.