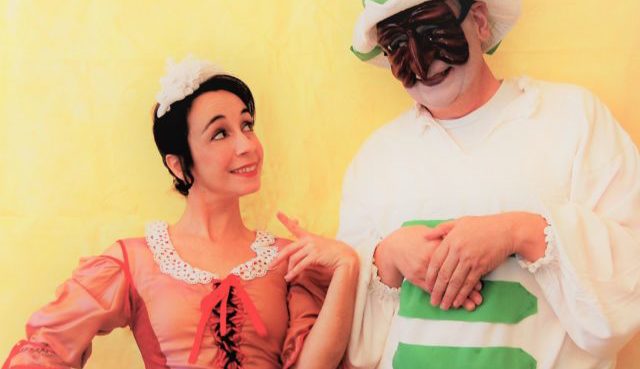 A student of commedia dell’arte since her college days in Bologna, Chiara Durazzini champions the art form here in America through her troupe, Pazzi Lazzi.

As a champion of commedia dell’arte — an Italian theatrical tradition with roots in the 1500s — Chiara Durazzini is used to hearing theater aficionados confess their ignorance. In some cases, not even Italian Americans quite know what it is. At least that’s what they say, anyway.

As the Florence native likes to tell people, “If you think you haven’t seen commedia dell’arte, maybe you have — and just didn’t know it. Shakespeare based a lot of his comedy on commedia dell’arte.” In fact, three of the Bard’s most famous plays — “The Tempest,” “Love’s Labor’s Lost” and “The Taming of the Shrew” — bear a decided stamp of madcap commedia energy.

Such is her dedication to commedia dell’arte that Durazzini co-founded Pazzi Lazzi, a Boston-based company, to bring the art form to American audiences. To that end, she stages performances in English with some Italian sprinkled in and devotes much of her time to teaching the craft to eager audiences.

For actors who take her class, commedia deepens their comic craft: for the curious, learning about commedia and watching it in action helps them better understand why so many forms of modern comedy, including slapstick and vaudeville, have roots in it.

Rarely does a performer and artistic director take a form of theater so historic and put clever twists on it that not only honor the tradition but also make it relatable to today’s audiences. But Durazzini has energy, intelligence and intuition aplenty to create and convey commedia’s magic. She spoke to Lou&A about what sparked her interest in the genre, and what it means to expose modern audiences to it.

Lou&A: Tell us how you developed an interest in commedia dell’arte

Chiara Durazzini: I was born and raised in Florence, and then I started at the University of Bologna and I loved it — the best place ever for a college student. I earned the equivalent of an MFA in theater history, and I moved to Boston in 2000. I wanted to mix with the Americans, and I started doing theater with local companies. They were very welcoming to me, and very slowly I sensed the need to go back to my creative roots. I always said that there was a lack of physicality, and studying in Bologna I was a physical actress: I love to dance and do mime, and at the university I learned those things.

L&A: You did a lot of workshops with famous commedia dell’arte actress Claudia Contin Arlecchino and eventually founded Pazzi Lazzi around 2010. What do you find especially rewarding about leading this company?

CD: It’s so rewarding to see this old style of theater — 500 years old and Italian — inspire such a deep interest. I’ve taught age levels from kindergarten to 12th grade to adult. Some of the participants are actors, and some just like Italian culture or theater. And I’ve instructed many different college students through theater departments, dance and movement programs, and Italian departments.

L&A: It sounds like you have a focus that’s as much based on education as performance.

CD: My main goal is to help Americans get exposed to it, and as I teach it, it makes me appreciate it more. With young students I see how much fun they have, how much they learn. They are very tired at the end of workshops, but they are so happy and often bring their friends in later.

CD: If it’s a short demonstration, I have some of the artists come on stage, and I explain some of the characters: what they are about, their names, their grotesqueness and their physicality. The musician adds different music for each character. In the 1500s, some instruments were played by the upper class, so a nobleman might play the traverse flute. Pulcinella, the poor southern Italian, might play tamburello, the tambourine. So the participants get to appreciate commedia, but best of all they get to try it with their own bodies. With a three-day intensive we go deep; we improvise scenes and we have them try on the masks.

L&A: How did commedia dell’arte compare with other forms of theater during the 16th and 17th centuries?

CD: It started in the squares and streets of Italy; it was street theater. So imagine if someone stopped in the street and in the middle of the show to watch. That’s why there were archetypes — and the masks helped people recognize who the character was. It’s not an intimate, naturalistic type of theater you can watch in a black box: It’s just the opposite. There’s dancing, very big physical gestures and the masks are brown or black made of leather — very different from the delicate Venetian masks. It’s low comedy and the characters are very rustic.

L&A: But it certainly didn’t stay confined to rustic Italy.

CD: In the late 1500s, some troupes became so important and popular that they traveled from court to court, and then so famous they traveled throughout Europe — until commedia dell’arte wound up in the court of the King of France. Commedia went to Spain, Russia, Poland, Great Britain — many other countries. The funny characters remained the same and even the vulgar parts stayed intact. But there was also an educational part; the noble characters could sing, recite poetry and play instruments.

L&A: You developed a show around Isabella Andreini, a commedia dell’arte performer who was popular during Shakespeare’s day. It sounds as though she was truly revolutionary.

CD: She was one of the most renowned performers of her time and traveled to courts in Italy and France. She was an actress, a poet, a writer and she managed the company as well. That’s why I called my show “Isabella Unmasked — The Legacy of an Italian Renaissance Woman.” She had many talents and specialized in many things.

Isabella was one of the first women on stage to act every character, including the males. It was the reverse of what was happening before then, because women were not allowed on stage and men played female roles. It was that way with Shakespeare, and she was a contemporary. But thanks to commedia dell’arte, things changed much earlier in Italy than in England.

L&A: All great art defies description — but if you had to explain the magic of commedia, what does it look like?

Mary: remove the red if you need to.

CD: It’s almost like dancing — that’s how many people get hooked on it. For me it’s the same high. (Laughs.) It’s the combination of having a story, being funny and being physical. Commedia dell’arte has all of those things; it puts together my three favorite things. And I have this fascination with its history. You have to live it, and the beautiful thing is to pass it to someone else. Whether I’m doing a workshop or a show, it reminds me of an essential truth: In the end we are humans; we love to interact — and we love to pass something on.

The above appears in the September 2018 issue of the print version of Fra Noi. Our gorgeous, monthly magazine contains a veritable feast of news and views, profiles and features, entertainment and culture. To subscribe, click here. 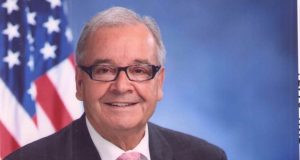 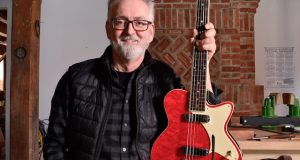 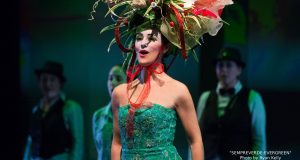