In dedicating his academic career to preserving and celebrating Sicilian language, literature and history, Dr. Gaetano Cipolla has engendered countless pages devoted to the beloved island of his birth.

While Rome’s emblem boasts an ancient symbol of a wolf suckling its twin founders, Sicily’s emblem packs equal primordial power. Known as the Trinacria, it depicts the winged head of Medusa, girdled by shafts of wheat and three bent legs, on a bold background of gold and maroon.

She’s the gatekeeper of an island as mysterious as her own visage. Just as many Italian Americans can’t understand the language of their forebears, the Sicilian tongue baffles most native Italians. “Where are you from?” translates to “Di dove sei?” in Italian, but it’s “Di unni si?” in Sicilian.

Sicily’s mysteries are passionate, poetic and profound beyond measure, and no other academic in America understands that better than Dr. Gaetano Cipolla. Born and raised on the island until he emigrated to America as a teen, this professor emeritus at St. John’s University has devoted his life to the study and celebration of Sicilian language, history, culture and literature. He became president of the international organization Arba Sicula in 1987, taking over as editor of the organization’s eponymous journal the same year and launching its newsletter, Sicilia Parra, two years later. Over the last four decades, he has accrued a record of scholarship so prolific he earned the title “The American Voice of Sicilian Poetry.”

Lou&A asked Cipolla to look back on his upbringing and storied career as a champion of all things Sicily. As he shares what life was like on the island, listen for the voice of a true poet.

Lou&A: Tell us about your Sicilian roots. What was it like growing up there?

Dr. Gaetano Cipolla: I was born in Francavilla di Sicilia in 1937. My father was a shoemaker specializing in women’s shoes. My maternal grandfather emigrated to New York alone at first and eventually took my grandmother and her two younger daughters to the U.S., leaving my mother, who had gotten married, in Francavilla. After World War II, my grandparents retired in Francavilla, but Italy was struggling to recover from the ravages of war. My family had the opportunity to come to the U.S. in 1955. I’d just received the diploma as an elementary school teacher when we left.

With my 18 years in Sicily, I carry each moment written in my memory with indelible ink. We had the absolute freedom to roam everywhere — to search, to experiment, to test, to dare — in complete assurance that we were invincible, that nothing could harm us. The days of our youth were filled with discoveries of our strengths, our fears, our courage and our growing bodies. We played soccer with green oranges for lack of a ball until utter exhaustion; we rode bikes pretending we were Bartali and Coppi; we had heroes with names such as Hector, Achilles and Ulysses. We formed friendships for life: Our allegiances were absolute.

Lou&A: How would you introduce our readers to Sicily’s very distinct culture?

Cipolla: It’s difficult to characterize Sicilians. Whenever you think you’ve found a key, something pops up and the key does not work. I wrote a booklet to explore the essence of Sicelitude titled “What Makes a Sicilian?” We have sold more than 25,000 copies, which tells me people identify with its content.

Out of the many people who dominated Sicily, two or three left a mark: the Greeks, the Arabs and, to a lesser degree, the Spaniards. Sicilians inherited their sense of drama, liveliness, hospitality, gifts for reasoning and even their physical demeanors from the Greeks. Sicilians are much closer to Greeks in looks and attitudes than to Venetians or Florentines.

The Arabs, who ruled the island from 827 to about 1092 A.D. had a lasting effect on the Sicilian outlook. It may be said that Sicilians inherited the Arabian sense of fatalism, persistence, and their acceptance and resignation to a harsh life. The Sicilians’ thoughtfulness and melancholy, their deep sense of nostalgia and bouts of depression are also Arabic in nature.

They also share many traits with the Spaniards, who were masters of the island for more than five centuries. The Spaniards’ sense of grandeur and preoccupation with how things look — their love for pomp and ceremony, for decorations and external elegance — touch responsive chords in the Sicilian psyche.

Lou&A: You’ve dedicated so much of your life and career to Arba Sicula and Sicilia Parra. What drove that?

Cipolla: My longstanding interest in Arba Sicula was a way of connecting with my roots. I’d reached the rank of associate professor at St. John’s University, specializing in Jungian approaches to literature, before I turned my attention to Sicilian language and culture.

Before the 1980s, I hadn’t written a word about Sicily. But having been born there, I carried Sicilian culture in my blood. Starting around 1980, I became interested in the group of people who had founded Arba Sicula, an organization dedicated to the study, preservation and dissemination of Sicilian culture. I started to devote time to studying Sicilian poetry, especially the poetry of Giovanni Meli, translating “L’origini di lu munnu” and then his “Don Chisciotti e Sanciu Panza,” which required four years. The experience was so rewarding it changed the course of my career. I remember reading the poem at night in bed and laughing. I had never made such an intimate and visceral connection with a poet. His Sicilian spoke to me at a deeper level. When I read his famous poem “Ucchiuzzi niuri” that Goethe himself liked and translated into German, I realized that true poetry has almost a physical effect if it’s in the language you learned as a child. I could not ignore the call.

Lou&A: As a professor emeritus, where does your energy go these days?

Cipolla: I write, give lectures occasionally, and publish Arba Sicula and Sicilia Parra, in addition to other books, mostly on Sicilian subjects. As editor of Legas, I have published so far about 140 titles since 1988. I created the first college textbook for learning Sicilian, “Mparamu lu sicilianu,” and I’m happy to say it’s having great success. Last year, I published an Italian version, and interestingly the English version has been reprinted three times already. The book is being used at the Universitè de la Manouba in Tunis and the University of Pennsylvania.

Lou&A: There’s the risk that Sicilian culture will continue to fade as the world continues to globalize. What are your views on this?

Cipolla: About 50 years ago, someone predicted Sicilian would disappear in 30 years. I’m glad to say that it hasn’t happened. I am optimistic Sicilian will evolve and adapt. Arba Sicula has been at the forefront of the struggle to study, preserve, and promote the language and culture of Sicily. Hopefully, it will continue for a long time.

Lou&A: What elements of your Sicilian heritage and work give you the most joy?

Cipolla: Arba Sicula was founded in 1979 by people who believed that the Sicilians’ reputation in this country did not correspond with reality. While most of the original founders are gone, Arba Sicula has remained faithful to the original objectives. This is our 41st year of uninterrupted operation, and our goals, reprinted in every issue of Arba Sicula, state: “We are, above all, concerned that the key to the Sicilian soul (the language of our forefathers) be preserved and studied with attentive appreciation.” We have done that. 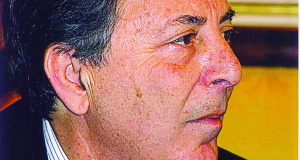 SACA to present an evening of Sicilian poetry