Posted by: C.J. Martello in Columns, Highlights, Petals From Roseland May 13, 2020 1 Comment 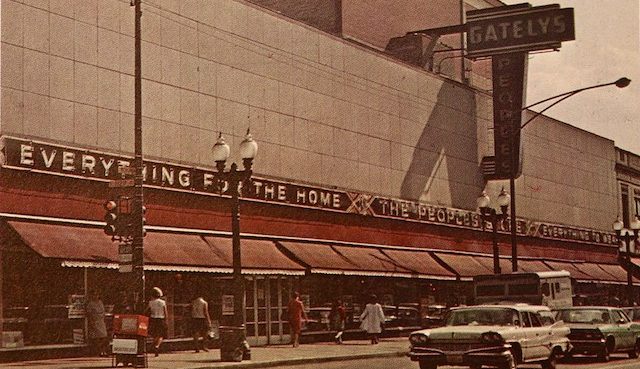 Throughout the more than 10 years I’ve been writing Petals from Roseland, I’ve been told many stories. I’ve also conducted many interviews with friends, family members and readers. These have yielded a treasure trove of random snippets, some of which I’d like to share with you now.

The Pullman Tech All Class Reunion back on Oct, 14, 2016, was a special event for me because I finally got to meet accordion and keyboard player Frank Rossi in person. He, Michael Vittori and Bruce Meyer have been entertaining Roselandites for years but this was my first face-to-face encounter. We’ve been buddies ever since. 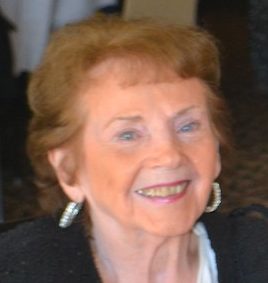 I was privileged to be a speaker at a recent Pullman Tech event where I gathered a story or two. One I remembered and have repeated often was told to me by Norma who journeyed back from age 80 to 16 as she told it to me. She and a girlfriend were out front by the lagoon at Pullman Tech when someone dared the two of them to jump in and of course they did! Some things never change!

Their laughter and good time were cut short, however, as the principal. Mr. Brubaker came out the front door of the school and spotted them. The girls ran out of the lagoon, grabbed their books and took off running with the boys they were with. The next day they laughed about their adventure as they told their friends about their daring do … until Mr. Brubaker called Norma’s girlfriend into the principal’s office. Norma laughed as she told me the final line, “Mr. Brubaker didn’t call me into the office because he liked me.”

When I returned from Vietnam in 1968, I attended what turned out to be the beginning of Olive Harvey College: the little remembered Fenger Junior College. That is where I met my future wife, Marilyn Chao, whose family operated Roseland’s premiere, if not only, Chinese restaurant, the Tea Garden, located across from the Roseland Theater on the Ave.

My wife’s family eventually moved to the North Side and we left Roseland when they did. Recently, her cousin Mary bought one of my books and called me from Los Angeles because the stories she read brought back some old Roseland memories about her family and Mr. Gately.

When Mary brought up the subject of Gately’s from my book, her mother (divorce or no divorce, she’s still Aunt Ying to me) remembered her own Gately’s story. Aunt Ying had three daughters and one son and had gone shopping at Gately’s for dresses for her girls. After picking over the center aisle sales tables, which she loved to go through, she spotted some dresses she liked.

She found three dresses in the right sizes for her girls and was thrilled to buy them. She had one problem — she didn’t expect to find the dresses she wanted and hadn’t brought enough money to pay for the perfect dresses she found. She stood there considering her options: Should she ask the clerk to hold them, should she put them on lay-a-way, or should she just put them off to the side and take her chances?

Just then, Mr. Gately spotted her standing there not doing anything: That’s was a no-no if you were in Gately’s. Mr. Gately approached Aunt Ying and ask her if there was a problem. She told him she hadn’t brought enough money and didn’t know what to do about the three perfect dresses she’d found. Mr. Gately’s answer: “Go ahead and take them home. Come back and pay for them later.” Ever so thankful, Aunt Ying took the dresses home and made it a point of settling up.

When pressed for why Mr. Gatley might do such as thing, Aunt Ying said that Grandfather Chao had been a friend of Mr. Gately and had helped him out once. Apparently, Mr. Gately needed to store some cash and couldn’t keep it at the store. Grandfather had a large safe at the restaurant and came to Mr. Gately’s rescue, and they’d been good business friends since then.

Over the years, I’ve heard many stories of Gately’s generosity and consideration. Of course, I’ve also heard stories of how stern he could be when it came to business and his employees. Gately’s was a major part of growing up in Roseland and I would welcome any stories you readers care to share. Remember that no story is too short or too long. 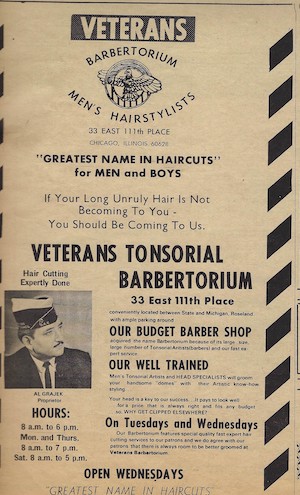 Does anyone remember the Vet’s Barber Shop on 111th Place? I saw a query from Fenger graduate Ken Ingalls asking what happened to it. That was the place that so many Roseland boys got their haircut or crew cuts cheap! Their front was windowless as a deterrent to union organizers who didn’t like their non-union pricing.

In reading over the adjacent ad, I recalled how busy the place always was on Saturday mornings as that was when dads brought their kids in. I swear my head was far rounder back then than it is now that I give myself crewcuts.

Recently my brother Augie and I went to meet some friends before heading to lunch at Pullman’s Calumet Harbor Restaurant. We were both surprised when they told us to meet them at the Roseland Christian Missionaries Thrift Store, located at 33 East 111th Place. You know, in the old Veteran’s Barber Shop building,” they told us. That certainly got our interest going. It turned out that our friends’ church, the First Reformed Church of South Holland, sponsors and supports the thrift store.

Walking into the building brought back memories of those crowded Saturday mornings. As adults, the place seemed smaller, of course but we were still amazed. We couldn’t believe the different levels and numbers of rooms. After a minute, we did recall having to go downstairs to different levels and that every chair was busy as could be. It wasn’t until I read the accompanying ad that I realized they had 25 barbers on duty at all times. Believe me, with haircuts so cheap, it was no wonder they were always busy.

We did go to Calumet Harbor Restaurant for lunch and as sometimes happens in Pullman and around Roseland, it turned into a mini-reunion. We ran into Dino Rigoni, a couple of the Ronzanis, and Chris Campagna — all longtime Roselandites. After we got all the “No way!” “What have you been up to?” “I haven’t seen you in so long” out of the way, we had a great lunch. 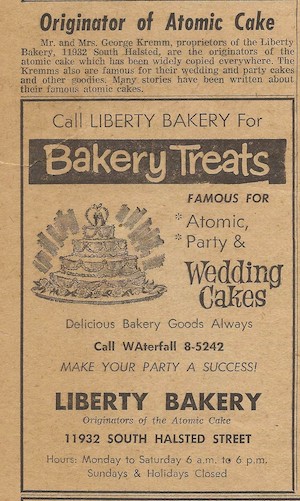 While we were talking about Roseland, someone brought up that they’d just had an Atomic Cake, but it wasn’t like the ones from Liberty Bakery where the Atomic Cake originated. That was a great topic of conversation because a lot of places claimed to have originated the cake. The adjacent ad and story shows that Liberty Bakery was the originator.

Nowadays, you can pick up things that are called “Atomic Cakes” but just have a taste of the proper fillings without fulfilling the original recipe. I know this because I’ve made the cake myself. There is only one way to make an Atomic Cake and that is with fresh-bought quality ingredients — no skimping. Follow the recipe to a “T” or don’t bother.

For non-bakers, everyone at the table agreed Calumet Bakery comes closest. A little research and I cracked up — they have one for $180, which blew my mind. However, since it is a full sheet cake it will feed 100-120. By the way, a good tip to remember when serving an Atomic Cake: The layers don’t have any stability when cut so you must serve the cake in triangular slices.

Combining talk of the Ave and baking, I’ve got to mention one place that has been in business for more than 40 years and is still open as always for carry out. Chicago’s famous Old-Fashioned Donuts at 11248 S. Michigan Ave., a couple of doors over from where the Calumet Index offices were located. They may not sell cakes but they do offer a great variety of donuts and actually, one that is cake. It’s well worth it to run in and out with some great donuts and do a quick look-see at Roseland’s condition.

If reading this article or reading my book has brought up any of your own memories of Roseland, Pullman,or Kensington feel free, to send them to me so you can help others recall our beloved Roseland.

CJ Martello has returned to his roots as the author of “Petals from Roseland.” After five years of writing his column as a resident of Chicago's North Side, CJ put his money where his heart is and moved to Pullman, near the Roseland area in which he grew up. Having joined the Spaghetti-Os, Veneti nel Mondo and St. Anthony of Padua Parish and being one of the founders of the Roseland Roundtable Facebook page, CJ has become reacquainted with countless friends and acquaintances from his youth. CJ is looking forward to retirement and completing the books he has put on hold, including one that will encompass as much of Roseland's rich, beloved history as possible. 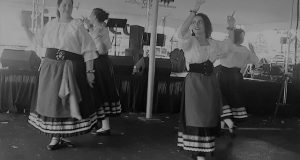 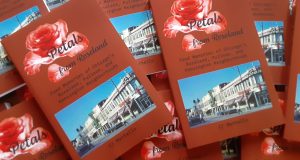 A book and a look at Pullman’s past 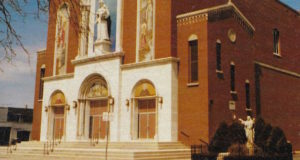 St. Anthony’s is alive and well!